I’ve talked at length about the technological details of my teaching setup, and I frequently get questions about exactly how it works. This post is an attempt to document my current setup1.

Before reading on, it’s important to note a few things: 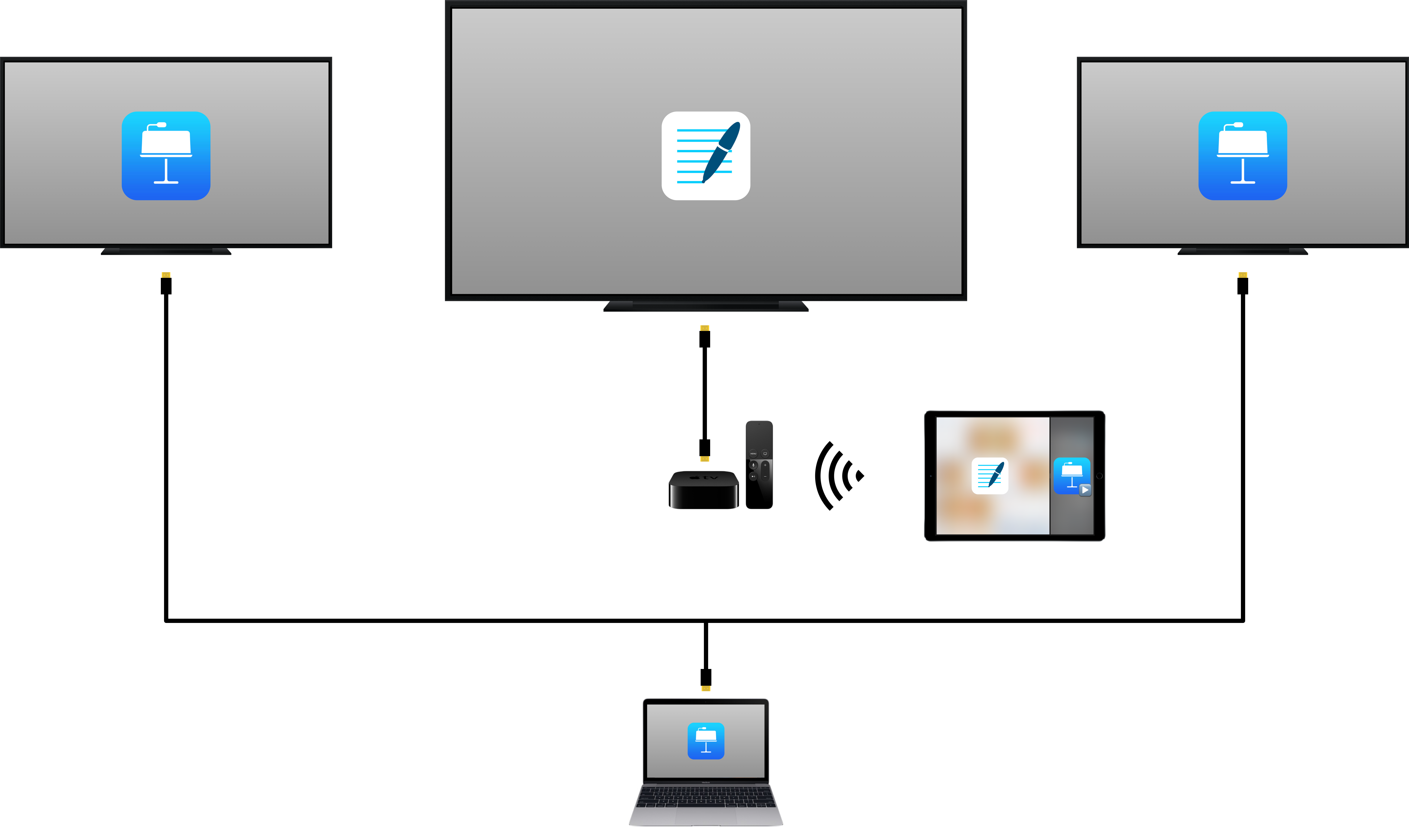 In short, I wirelessly project my iPad to the main screen via an Apple TV, and control my MacBook (which is projecting the side slides) from my iPad using Keynote for iOS’ remote functionality.

Here’s what I use to make this happen:

In addition to needing two screens in the classroom with two distinct inputs, I use:

The reason this system works so seamlessly is the software. Here’s what I use:

I also keep OmniOutliner running on my iPad with notes that I reference throughout the lecture such as answers to practice problems and information on who to call on.

I could theoretically use other software to get all of this done, but here’s why this particular constellation of apps and services works so well or me:

This setup can get more or less complex depending on your needs and resources.

If I’m stuck using a one screen setup, I usually choose between GoodNotes (if I have a lot of writing to do) or Keynote (if my class plan has lots of animations in it). I could (and do) switch between the two apps occasionally (e.g., if I have mostly handwriting to do but have one animation to show later in the class), but it’s not a particularly smooth transition. For polling, I recommend Perfect Browser pointing to your Poll Everywhere polls, since it has a UI-hiding presentation mode as well.

I’m currently experimenting with  adding another device to this setup in the form of an always-on iPad that only I can see. On this iPad I run my OmniOutliner notes and the Poll Everywhere presenter view in Split View, so that I don’t have to use Slide Over on my main iPad (which can accidentally advance my Keynote slides if I’m not careful). That said, I think I can do more with this additional device; if you have any suggestions, please get in touch.

This setup has worked very well for me, but only because I genuinely believe that it improves the learning experience for students. Having supplementary animations and interactive polls has well established benefits, but these materials are often accompanied by increased friction as the instructor switches inputs, activates the poll, and troubleshoots errors in the middle of class. The setup in this article minimizes that friction and, once you get the hang of it, maximizes the time in the classroom spent on learning.

That said, my parting advice is to weigh the costs and benefits of complicating your teaching setup before trying out something like this. Hopefully the benefits are clear, but the cost in the form of an increased cognitive load as you teach is nontrivial. Keep your eye on the real goal of improving learning and, if this post helps you get closer to that goal, have fun!